Wednesday, February 8 2023 - Welcome
Latest Posts
How To Start Over: 4 Ways To Make...
Top 10 Beautiful Migratory Birds in India
4 Signs You Need To Invest In A...
Top 10 Indian Clothing Brands With Foreign Labels
How Starting a High School Esports Team Can...
Redecorate Your Bathroom in 5 Easy Steps
Rope Clamps Buying Guide- Types and How to...
iTop PDF: A Superb PDF Software
Top 10 Best Shampoo Brands in India for...
3 Signs that it’s Time to Get a...
Home Arts Well-Known Paintings of Heavenly Creatures
Arts

The rise of Christianity has given way to countless works of art on religious themes. Depictions of heavenly figures can be found in all styles of art, with the heaviest concentration being found in Renaissance art. The trend of angels painting continued to be popular throughout the Baroque and Romantic movements, and paintings on the subject continue to be finished today. 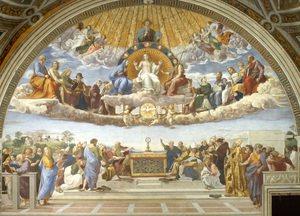 Raphael was born Raffaello Sanzio da Urbino, in Italy in 1483. Finished when he was just 27, Raphael’s iconic fresco can be found in the Apostolic Palace in the Vatican City.

The fresco is broken into three tiers, with the most recognizable biblical figures split amongst those tiers. The focal point of the fresco is the middle tier, where Christ sits on a throne between John the Baptist and the Virgin.

Others, including Paul, Peter, Moses, and Adam sit on either side of them. The bottom tier symbolizes the Earth, where viewers can identify men who gave their lives to the church. Pope Gregory I, Saint Augustine, Pope Sixtus IV, and Dante Alighieri can be seen, scattered around an altar topped by the monstrance. 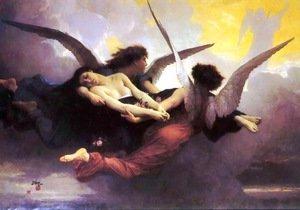 While not a Renaissance aged painting, this work takes inspiration from the master painters of that era. The work depicts two angels flying toward heaven as they cradle a soul of the recently deceased. Not only does this work recapture the religiosity of Renaissance art, but it also serves as a window into the artist’s life.

The work was inspired by the loss of Bouguereau’s wife and child in 1877. It’s clear that he was using this work as a way to untangle the grief of his loss while maintaining his faith in a reunion in the afterlife. The dark skies around the angels provide a somber tone as the angel’s transport the unidentified soul to heaven. A small bouquet of flowers can be seen in the bottom left of the canvas, perhaps left by those that grieve the loss.

The Creation of Adam, Michelangelo Buonarroti 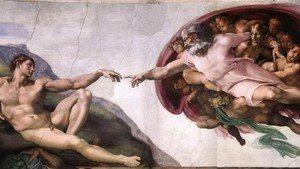 Completed in the same year as the Disputation of the Holy Sacrament, Michelangelo’s The Creation of Adam is one of the most recognizable biblical paintings of the Renaissance era. The left side of the canvas features Adam from Genesis, who sits atop a cloud and reaches his right hand out towards the center of the piece.

The right side of the canvas shows God the Father, seated atop a cloud and surrounded by angels. He also has a hand outstretched towards the center, with His and Adam’s fingers almost touching. This work is thought to symbolize the close relationship between God and humanity, with only a small gap existing between them.

This work continues to inspire artists and art lovers as they ponder the symbolism that Michelangelo packed into the painting. You can also check Botto for Decentralized Autonomous Artist. 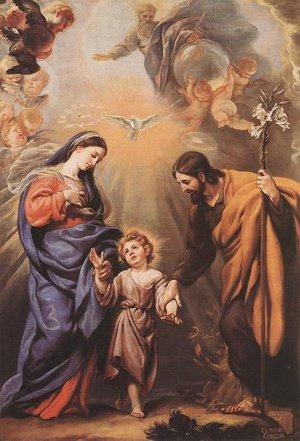 Claudio Coello is considered by many to be the last great Spanish painter of the 17th century. A Baroque artist by style, Coello painted extensively with biblical themes. One of his most notable works, Holy Family, depicts Joseph, the Virgin, and a child Christ as the focal point of the painting. Above them is God the Father, surrounded by a number of angels.

Between the two flies a white dove, meant to symbolize the dove that God sent to Noah as a sign of peace after the great flood. This piece is noteworthy for the composition as it gives a sense of motion and detail in the clouds that surround God and the angels. 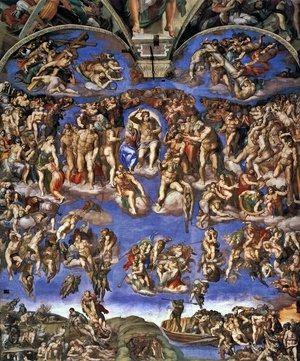 Completed in 1541, this masterpiece took more than five years to finish and spans the entire altar of the Sistine Chapel in Vatican City. This massive fresco finds Christ as its focal point, back from his second coming to provide the final judgment.

On one side of Christ sits John the Baptist and the Virgin, on the other Saint Paul with the keys to Heaven in hand. Hundreds of characters can be viewed in the scene, with some climbing ladders to heaven while others are seen being damned.

This fresco originally received criticism for its depiction of nude bodies, so much so that some later had draperies painted on to protect modesty. Thousands come to visit the Sistine Chapel to view this masterpiece every day, proving that Michelangelo’s work has stood the test of time.

Heavenly creatures have been the subject of paintings for hundreds of years, many of which were painted during the Renaissance. These works continue to be visited all over the world by thousands of art lovers and religious alike. These are but a few of the paintings that include heavenly creatures, with plenty more out there to be discovered by art lovers.

What EMT’s Need to Know About the Novel Coronavirus?

Different Rajasthani Folk Dances You Should...

Pole Dancing: An Excellent Way to...